Each Monday I read the blog for the NPR show “Wait, Wait…Don’t Tell Me!” where they have a post called “Sandwich Monday”. The WWDTM team tries a sandwich (usually something very weird or crazy) and reviews it (which if you ask me is an awesome job). On one Sandwich Monday, they reviewed a microwave s’mores maker that allows you to make s’mores indoors. No more having to brave the elements and start a campfire to enjoy some gooey s’mores deliciousness. You can do this from the comfort of your own home.

But could you really make s’mores in the microwave? And would they be any good? And did you have to actually use this special s’mores maker to make them? Well, our team of crack scientists set out to test this (and by “crack scientists” I mean a group of us who pretend we are scientists and do strange food experiments only conducted by people actually on crack or acting like someone who just smoked some rock).

Hypothesis: You have to have this super cute s’mores maker in order to make them in the microwave. Why would they be selling it if you didn’t? 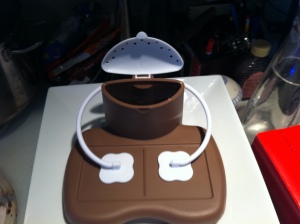 Experimental: We first tried making s’mores using the s’mores maker following the instructions on the box. We filled the little reservoir with water, put our s’mores stack together and then placed it on the plate using the maker’s very cute white-gloved hands to hold the stack in place. We then microwaved it at different times to see how it turned out. Then we ate the s’mores.

After successfully determining the time needed to get the marshmallow and the chocolate to the correct consistency, we ate it and found that it tasted good. The only drawback was you don’t get the toasty skin on the marshmallow like you do when you make it over a campfire.

The experiment where we made s’mores without the s’mores maker failed because the top portion of our unheated s’more kept falling off. The top graham cracker could not be balanced easily on the uneven pillar made from the chocolate and marshmallow. Trying to put other things on top to hold the stack in place also did not work.

Conclusions: Our hypothesis was proven correct. You do need those little hands on the s’mores maker to hold everything in place as the s’more is heated. And s’mores are delicious even in the microwave!

Experiment #2-Bacon S’mores
We were so pumped from a successful experiment that we continued our scientific quest into the world of microwave s’mores. This time we decided to modify the classic s’mores recipe with one of the most delicious foods out there…..bacon!

Scientific Question: S’mores are delicious. Bacon is delicious. Can adding bacon to s’mores make it even more delicious?

Methodology: Assemble s’more but add bacon to the stack. Follow instructions on microwave s’mores maker box to make a s’more. Eat the s’more. Make observations during cooking and eating.

Because the s’more was too sweet, we tried cutting back on the amount of marshmallow, but it still was a bit too sweet and we couldn’t really taste the bacon.

Conclusions: It seems that the s’more is a bit too sweet and covers up the flavor of the bacon. This is especially true when the bacon is right next to the marshmallow. But because we believe that bacon could make a s’more taste better, we refuse to say our hypothesis is incorrect. Instead, we modified the experiment to see if we could make this work.

Scientific Question: If we replace the graham cracker with bacon strips, can we get a delicious, bacon-y s’more?

Hypothesis: This will be awesome!

Experimental: So it was time to assemble our graham cracker-less bacon s’more. Instead of making a sandwich, we decided to take the strip of bacon and wrap it around the marshmallow and piece of chocolate. We then held it in place with a toothpick. After assembling it, we had to figure out how long to microwave it for (we just put the little bundle on a plate) since we weren’t sure if 40 seconds would still work. 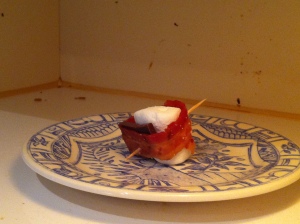 Conclusions: Ditching the graham cracker did the trick. The s’more tasted good and was a nice blend of savory and sweet. The marshmallow was still a tad bit too much, but it was still very tasty.

Future Work
Though the results of the last experiment (#3) were promising, we felt there is still some further testing that can be done.

In the final experiment, even with cooking for only 10 seconds, the marshmallow was still soft and oozed out making eating it messy. Discussions with colleagues led to the suggestion of using the bacon to create a container, like a bacon basket. Taking strips of uncooked bacon, they could be woven to make a basket over a form, such as the bottom of a muffin tin, which is baked and then when cooked would retain its shape. The bacon basket could then be filled with a marshmallow and chocolate and then heated in the microwave. Instead of adding a piece of graham cracker, the top could be sprinkled with graham cracker crumbs. Future experiments will focus on the creation and the testing of the bacon basket for making bacon s’mores.

Concluding Thoughts
Smore’s are good, but bacon makes them taste even better. And as a result of the final experiment, we ended up creating a new hors d’œuvre we’ve christened “S’more Francis Bacon”. We hope to debut him at a party sometime in the near future.